This day 40 years ago, my father (22) and my mother(16) who was 6 months pregnant with my older brother was forced to evacuate Phnom Penh and march for days to work in concentration camps for nearly 4 years. My attempts to formally interview my parents about their accounts have not been quite successful because of time constraints and discomfort rehashing painful moments. While I have tried videotaping my parents comment on documentaries like “The Missing Picture” to help share their version of events, their stories come out at really random times when I’m with them. These are some of the things I’ve learned:

This TED Talk is also an amazing account of a family’s experience and escape of the Khmer Rouge
https://embed-ssl.ted.com/talks/sophal_ear_escaping_the_khmer_rouge.html

Today, I mourn the loss of those who perished during that time and am grateful for the opportunities that my parents had been given living in this country.  I am touched by the stories of resiliency in our community and am happy to see that families are being reunited in Cambodia as well.

But I understand there are still many challenges the Cambodian refugee population and their families face. These are current stats on health and education in Cambodian American Community: 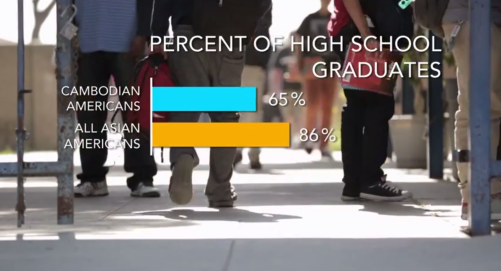 Going to UC Berkeley, I was aware that Asian Americans would be well represented. But I didn’t think I would struggle to find other Cambodian Americans. (35% have a high school diploma). This PBS Documentary highlights the challenges Cambodian Americans face when culturally speaking, parents have never really been involved in their children’s education, and don’t speak the same language at home. Even though I may have graduated from high school and college, I understand that I had enormous support from high school teachers, and mentors in college, and that I had to fight this self-deprecating lie that I wasn’t “smart enough.”

My parents and many other Cambodian refugees struggle with limited English speaking ability, anxiety, and PTSD. And while Obamacare has re-enabled people like my parents to get Medi-Cal and access to a primary care doctor, there are barriers because of declining reimbursement rates, and a lack of coordinated care for those who struggle coping with mental illness and the capacity of maintaining good health.

Given these challenges, I’ve been inspired and motivated to help address these issues in the aging Cambodian refugee community, and other refugee communities that are suffering as we speak.

I’ve been blessed to have been given the chance to mentor Cambodian American high school students through the Khmer Alumni Association. This experience has been valuable for me because it’s given me the chance to elaborate on my story and mistakes so future generations don’t have to make the same mistakes I did in college.

My Interest in Health Services Research

The problems I want to help solve: can we give effective treatment to patients and better coordinate primary care not only that they are gateways to specialty care, but also other allied health professions such as nutrition, pharmacy, psychology, therapies? My hope is that we build on something like the Patient Centered Medical Home that can adequately coordinate care for very complex issues in patients to minimize ER visits and unnecessary suffering.

For Holocaust survivors, there are incidences of delayed onset PTSD and I wonder what that means for our aging baby boomer Cambodian refugee population as they reach retirement and senior life. And if something like OnLok could exist in the aging Cambodian population, it would alleviate the impending burden and conflict that aging parents and adult children have. Will aging Cambodian Americans live with their children? Or will there children want their parents to live in Nursing Home facilities? Will those nursing homes provide the culturally competent care that will allow people to age with dignity?

Every April 17, I write and reflect on where I’ve come from because I believe it is vital to know your history to know yourself.